For as long as I can remember, actively making music has been part of my life. My initial attempt at playing an instrument, which lasted for about a year, was learning violin in 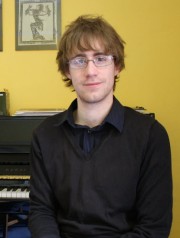 primary school (which I imagine was painful for everyone involved – fortunately, I’m blissfully unaware and remember none of it).

Shortly after that I began learning to play the piano and keyboard, both of which have been constants in my life ever since. Eventually, a lack of technical training led me to injury, which led me to discover both the Feldenkrais Method and the Alexander Technique. Through these methods of somatic learning I was able to overcome my injury and progress in my own learning in ways I never could have imagined.

The emphasis in both methods of the process rather than the end goal has been hugely significant in both my own learning and my development as a teacher, although initially my understanding of both was very intellectual. In October 2017 I graduated from the Chiemsee 7 International Feldenkrais Training, taught by Jerry Karzen.

Alongside piano I also learned to play electric and acoustic guitar. In my lessons I was introduced the wonderful (and initially, terrifying) world of improvising. Suddenly music theory had a use – I couldn’t get enough of it! It was at this stage that I started to see music from a creative standpoint and began to compose songs and instrumental pieces.

More recently I have taken lessons with renowned pianist, pedagogue and Feldenkrais practitioner Alan Fraser. Both taking lessons with him and observing him teach others has had a profound impact on my own playing and teaching.

In addition to piano, keyboard and guitar, I sing and have had a brief foray into the world of drumming (which is temporarily on hold, but something I plan on picking up again later). I also strongly believe that a teacher should always be developing themselves in many different areas; as such I’m currently learning German (which I speak conversationally); Ukrainian (in which I’m a beginner); and I’m constantly refining my knowledge about the learning process.

For more information about me, or to listen to my music please visit my other website nickowenpetch.co.uk